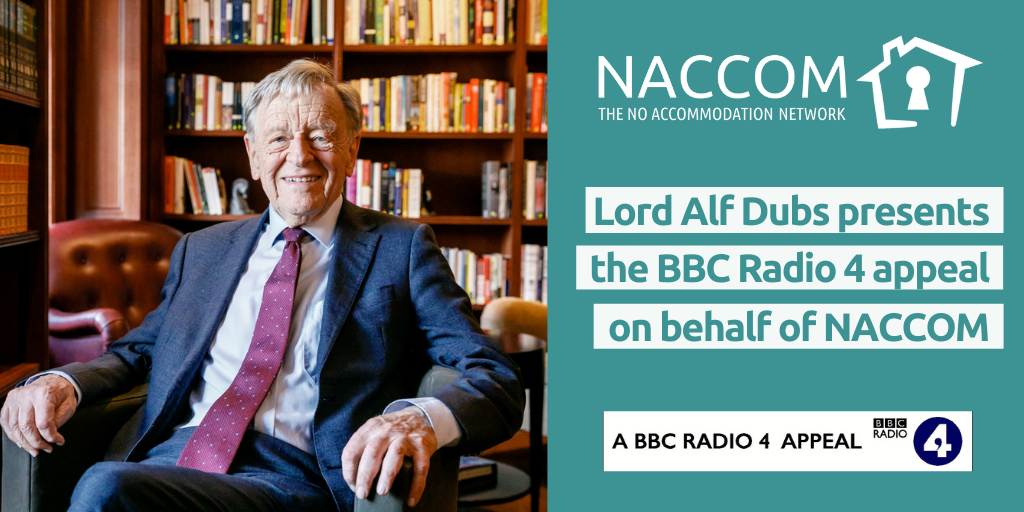 Lord Alf Dubs presented the appeal on behalf of NACCOM and our members, to raise awareness of destitution and homelessness in the asylum system, and vital funds to help us support our members and strengthen our collective work to #EndDestitution.

Lord Alf Dubs was just six years old when he was forced to leave Nazi-occupied Czechoslovakia at the outbreak of the Second World War, in 1939. Along with thousands of other children, Alf was evacuated on the Kindertransport, the rescue effort that took Jewish children to safety in Britain. He recalls standing at Prague station, watching German soldiers in Swastikas look on as tearful parents said goodbye to their children, many for the last time.

Fortunately, Alf’s family was able to escape persecution and re-unite in England. Alf’s father, who was Jewish, had already fled Czechoslovakia and met him at Liverpool Street Station. Alf’s mother was initially denied a visa, but was able to join Alf and his father in London shortly afterwards.

Alf’s experience as a refugee fleeing persecution has profoundly shaped his life, and he has spent his political career fighting for the rights of refugees and people seeking asylum.

Lord Dubs said: “Members of the No Accommodation Network provide support to refugees who have nowhere else to turn. They give them help with housing, legal advice, mental health support, and food parcels, and above all they provide them with person-to-person support, and that is so valuable.”

“I was given a warm welcome in this country when I was a refugee, and I would like other people arriving to be given the same warm welcome and support that I was. By supporting NACCOM and its members, you’re helping people have decent lives in this country.”

Everyone deserves somewhere safe to live

Sadly, human persecution is not a thing of the past. Now, when people seek protection as refugees in the UK it can take many years to resolve their claim, and during this time most people are not allowed to work, so they can’t provide for themselves.

People in the asylum and wider immigration system can find themselves forced into destitution and homelessness due to long delays, barriers to accessing legal advice, and hostile environment policies, such as No Recourse to Public Funds restrictions, that leave them without support.

Each year, NACCOM members support around 3,000 people who are forced to endure the indignity of destitution due to their immigration status.

Our appeal highlights to challenges and hardship that many people face as they go through the UK asylum system, and the vital role that safe and stable accommodation, and additional support including legal advice, can play in empowering people to take steps to move on from destitution, progress their asylum claim, and rebuild their lives.

In our appeal you will hear from Yasmin, who now has refugee status in the UK. Yasmin was forced to endure homelessness and destitution whilst her asylum claim was being considered. Like the majority of people who seek refugee protection in the UK, Yasmin was not permitted to work or provide for herself as she sought asylum, and her immigration status prevented her from accessing vital services such as homelessness assistance when she needed it most.

Yasmin was in a desperate situation; “I had no home, no money, no family, no relation, nothing. I can’t even rent myself a place for a night. I didn’t even know if I could sleep outside of a church or a bus stop.”

Through a hosting arrangement organised by a NACCOM member, Yasmin was offered a place to stay with a local family. Having a safe and stable place to live enabled Yasmin, who was five months pregnant at the time, to recover from her trauma, access support, and take steps to progress her asylum claim and move forward with her life.

Can I still donate to the appeal?

You can still donate to the appeal directly though NACCOM donation channels using the link below.

Your donation will help support our work providing expert advice and training across our membership network, to increase accommodation capacity and enable more people out of destitution and homelessness. We also work with our members, partners and people with lived experience to campaign for a fairer, more humane asylum system that doesn’t leave people destitute and homeless as they seek refugee status in the UK.

>>> DONATE TO NACCOM VIA OUR DONATION PLATFORM <<<