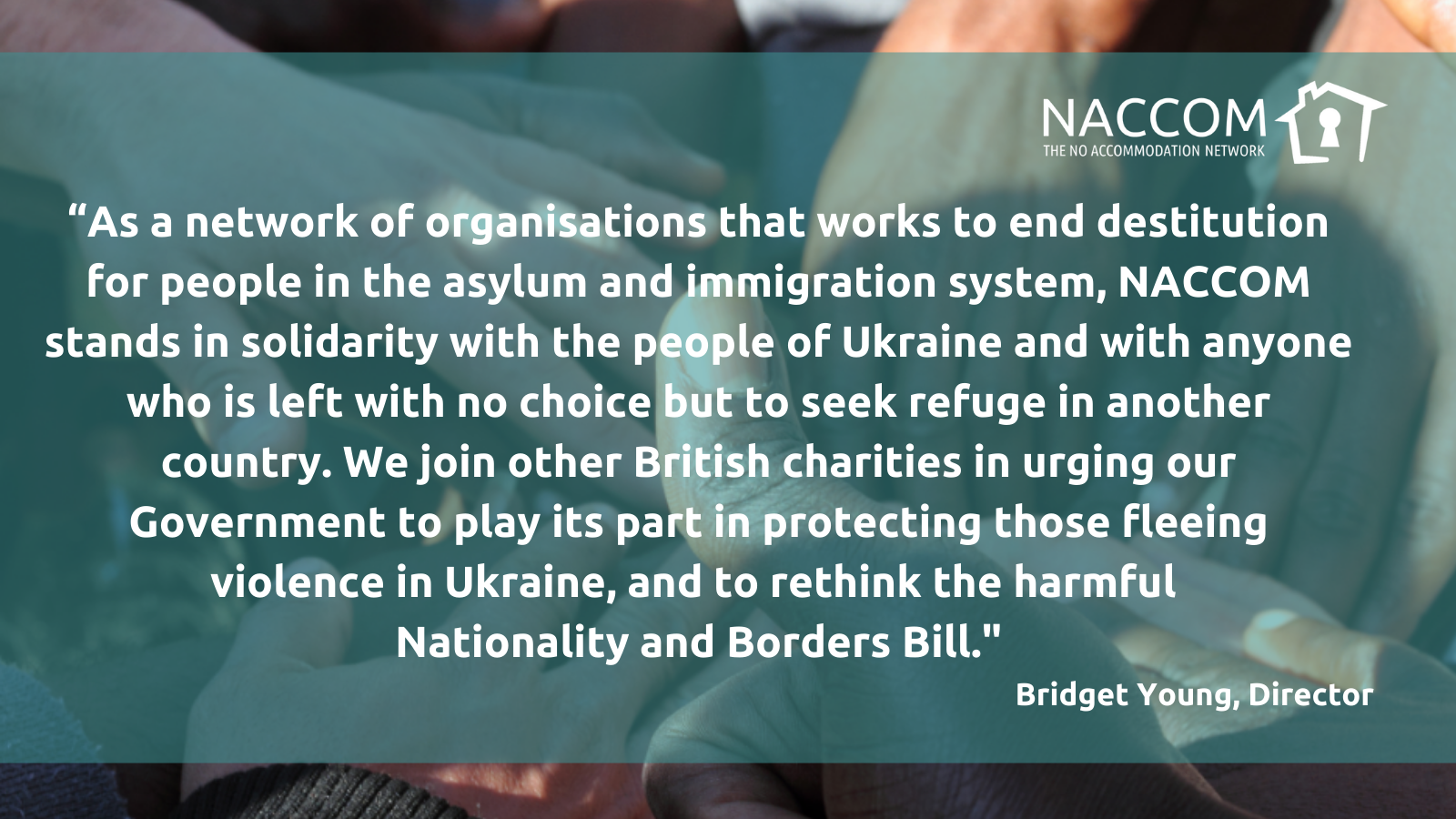 “Six months ago we watched in horror as the Taliban took over in Afghanistan, forcing hundreds of thousands of people to leave their homes and cross borders in search of protection. It gave real and dramatic clarity to some of the reasons why people might need to seek sanctuary in another country, like the United Kingdom.

Now, we again watch in horror as Russian tanks roll into the heart of Ukraine, and the world braces itself for another global humanitarian crisis as millions of Ukrainians flee their homeland to reach safety, or take up arms to defend their right to live free from oppression.

The need for safe routes and mechanisms for people to claim asylum in the UK has never been greater, or more urgent, than it is today. Yet, as Europe comes together behind Ukraine in an act of solidarity and support, the UK Government is pressing ahead with the Nationality and Borders Bill, which would treat people forced to make dangerous journeys to safety as criminals and push them into further trauma and hardship.

As a network of organisations that works to end destitution for people in the asylum and immigration system, NACCOM stands with the people of Ukraine and with anyone who is left with no choice but to seek refuge in another country. We all deserve the chance to live in safety and dignity, regardless of our immigration status.

We join other British charities in urging our Government to protect those fleeing violence in Ukraine and to follow the UNHCR’s call to keep borders open for Ukrainians who need to leave. We also call on the Government to rethink its flawed Nationality and Borders Bill, which will punish rather than protect people, when all they want is safety for themselves and their loved ones.

As a network we will continue to work with people at all stages of their asylum and immigration journey, walking alongside people to ensure that they can access accommodation, support and pathways to settle their status. Our network will continue to offer housing, hosting, access to services and legal support, working in partnership with experts by experience, community groups and statutory agencies.

We do this because the UK does not have a fair, just and humane immigration and asylum system, whatever the rhetoric we frequently hear from the Government that says otherwise. Many people are forced into homelessness and destitution because of their immigration status, they face a hugely complex, expensive and depersonalised system, they are not believed, are retraumatised and left in limbo as their claims take longer and longer to address.

We are working with our members to understand this fast-moving situation and the Government’s response to people seeking sanctuary from Ukraine. We aim to regularly update our members with information or signpost to other sources where appropriate.

➡️ We are regularly adding links to relevant resources to the Resources section of our website.

➡️ See the latest information and advice from the UK Government through their Home Office factsheet: Factsheet: Home Office action on Ukraine – Home Office in the media (blog.gov.uk)

➡️ Keep an eye on the NCVO website, where they are releasing guidance for charities about actions you can take in relation to Ukraine: How charities and civil society can support Ukraine | NCVO BlogsNCVO Blogs

➡️ The Free Movement website contains up-to-date information and resources on the UK Government’s approach to supporting Ukrainians coming to the UK: https://www.freemovement.org.uk/can-ukrainians-take-refuge-in-the-uk-immigration-concessions-and-asylum-policy/

In response to the humanitarian crisis in Ukraine, we are urging the Government to:

➡️ Establish a new safe route to ensure people fleeing war, and persecution, can easily enter the UK on humanitarian grounds and claim asylum on arrival.

➡️ Provide fair and speedy resolution for all people – including Ukrainians – who make asylum claims whether they are already in the UK or travel here through regular or ‘irregular’ routes.

➡️ Learn from the failures of the Afghan programme, which struggled due to weak collaboration with local authorities and insufficient funding, by providing a well-resourced initiative working with councils across the country to welcome Ukrainians who need sanctuary. Improved cross-Government planning and collaboration with councils, public health services and the voluntary sector will be vital if this is to happen.

📣 If you haven’t joined already, we’d encourage you to support the Together with Refugees Coalition, which is organising collective campaigning around refugee protection.

✒️ Sign the Freedom from Torture petition to the Government calling on them to provide greater support to Ukrainian refugees.

The Nationality and Borders Bill:

The UK cannot talk of influencing fairness, the rule of law and concern for the lives of people in danger in Ukraine, whilst at the same time implementing the Nationality and Borders Bill as it stands.

Following this week’s decision in the House of Lords to remove Clause 11 from the Nationality and Borders Bill, the events in Ukraine are a timely reminder of the inappropriateness of legislation that could discriminate and punish those fleeing war or persecution based on their method of arrival. The Government’s emphasis on settled routes in the Nationality and Borders Bill is weakened by the continued absence of a settled route to claim asylum for people in danger in Afghanistan – many of whom served the UK or have ties to this country.

➡️ We strongly condemn any planned measures that make it harder to be a refugee, or that further enable the Government to refuse refugee protection: to this end, we are calling on the Government to scrap Clause 11 of the Bill.

➡️ We urge the Government and all members of both Houses not to vote through the Nationality and Borders Bill as it stands, and instead create legislation that will address the challenges of the immigration and asylum system without punishing people seeking safety in the UK.

➡️ We call on the Government to work with statutory agencies, the voluntary sector, local communities, people seeking asylum and refugees in this country to design a system that is fair, just, proportionate and operationally sound.

Hosting refugees from Ukraine in your home:

Since the start of the war in Ukraine, we have seen an increase in enquiries from members of the public wishing to express an interest in hosting refugees from Ukraine in their home.

➡️ Please note that the majority of our members are involved with hosting people seeking asylum who are already in the UK, so it is unlikely that the current demand for hosts will be to accommodate refugees from Ukraine.

This may change however as further details of the Government’s humanitarian visa route are made available. It is currently unclear what the scheme will entail, how it will be run or how many people will be able to access it. We will be working with our members/national hosting partners in the network in the coming weeks and months to get a better understanding of the situation and what it might mean for hosting.

➡️ For more information on hosting and to express your interest, please see our hosting page.

The NACCOM network stands in solidarity with the people of Ukraine and anyone who may need to rebuild their life somewhere new after being forced to leave the safety and stability of their home.