C4WS Homeless Project is a winter night shelter based in Camden, North London. They joined the NACCOM Network back in July and have since been putting plans together to launch a hosting scheme alongside the night shelter. We recently caught up with their new project manager, Nikki Barnett, to learn more about their work.

How long has C4WS been in operation and how does it work currently?

C4WS Homeless Project started in 2005 and when we open our doors on the 9th November, this will be our  14th shelter season. Since 2005, we have supported well over 1000 people with shelter, food and hospitality in helping them to rebuild their lives.

The shelter operates across 13 different churches in the Camden borough, with each church taking responsibility for 10 nights of provision. In this way, we provide food and shelter for five of the coldest months of the year. This year we expect to accommodate more than 80 people in total.

Alongside shelter, our team offers welfare support to all our guests. This entails holistically working with each individual, supporting them around mental and physical health problems, addiction issues, immigration matters, welfare advice and housing advice.

What are the biggest challenges and opportunities that you are facing this year?

C4WS Homeless Project is needed as the number of rough sleepers in Camden remains the second highest of all the London boroughs, and homelessness has continued to rise by an average of 27% over the last 3 years in the capital.

During the last season, we received 361 phone calls for bed spaces at our shelter, which is five times more than we can accommodate. However, we are proud to say that 92% of the guests that engaged with our services were assisted in securing accommodation.

Our biggest opportunity this year is that we are the chosen charity of the Mayor of Camden, who is incredibly engaged with our cause. His passion for erasing homelessness in the borough is infectious, and has allowed us to broaden our scope.

How has NACCOM helped you so far?

The idea of setting up our own hosting scheme has been in the back of our minds during the last couple of seasons at the shelter, as we have seen a marked increase in the number of refugees and asylum seekers referred to us. Through our research this summer, we found out about NACCOM and attended the hosting conference.

We have found being part of the network incredibly helpful, particularly the online resources in the Library, which have been invaluable in helping us to draft the paperwork for our own scheme. We plan to launch this in the new year.

In a broader sense, NACCOM has enabled us to start conversations with many other agencies who run their own schemes, and we are already in talks about becoming part of a hub in the local area.

Find C4WS via our Project Directory and download a copy of their Annual Report here. 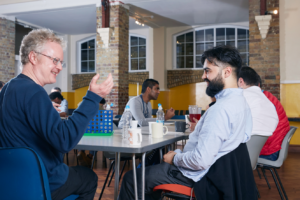