By Hannah Gurnham on 21st November 2019 in News, Project news

Night shelters were the fastest growing accommodation type in the NACCOM network last year, increasing by 33% from 9 in 2017 to 12 in 2018. One Roof Leicester joined NACCOM in 2017. We hear how their winter night shelter provision works alongside their year-round housing project to support those experiencing destitution.

One Roof Leicester (ORL) is a NACCOM member in the Midlands working to reduce homelessness in the local community. ORL runs a winter night shelter alongside a year-round housing scheme. The charity uses the Housing Justice model for night shelters, where the shelter rotates around different faith venues. 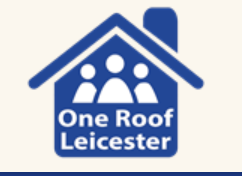 Last winter, from December 2018 to March 2019, the ORL night shelter received 46 referrals and provided 871 nights of accommodation. The shelter accommodated 25 people, 4 of whom were refugees.

The charity used seven venues to provide the overnight accommodation, including three Church of England churches, one Baptist Church, one Roman Catholic Church, one Hindu Temple and one Synagogue. In addition, they also used the Methodist Church as a meeting point. In total, over 300 volunteers were involved in the running of the winter night shelter.

The main variables from year-to-year are the number of venues involved, and the number of volunteers able to support the scheme. The ORL team is also able to respond to guests’ needs by varying opening times so that guests have longer indoors for example, and introducing social activities including board games to encourage interaction between volunteers and guests.

Those that are in the shelter who are eligible for Local Authority housing support are assisted to bid each week on properties, and the charity is working with the City Council to see if guests can be offered a room in a One Roof House until they secure permanent accommodation.

ORL has four shared houses for single people, which are offered to people who are homeless, have low support needs and find it difficult to secure other accommodation. They also provide a room in a shared house with support from a Support Worker and befriending from volunteers from the local community.

The charity also offers accommodation to those without recourse to public funds – EU migrants and destitute asylum seekers – if there is a pathway for them, which could be securing employment for an EU migrant or Section 4 housing for an asylum seeker.

For more information on One Roof Leicester please visit their website.

New guides available on the AASC and AIRE contracts
Could you be a NACCOM Trustee? We’re recruiting for up to three Trustee roles

“I feel so down and hopeless, I don’t know what to do. The Home Office asked me to sign a form and send it back to them but I don’t even understand what the form is.”

The Boaz Trust @boaztrust
Dear Home Secretary, @pritipatel, everybody should have a safe place to stay. We're joining with @NACCOMnetwork to say #StopAsylumEvictions. https://t.co/HeKpRlpPy8
2
2
Translate »