In this guest blog from a new host with NACCOM member Action Foundation in Newcastle, we hear from Helen*, who writes an honest, funny, poignant and thoughtful account of her and her family’s experience welcoming their first guest into their home – just as lockdown was announced.

We knew it was coming – but it’s a bit like childbirth, really: we were as prepared as we could be but you can’t really know what to expect. We’d done all the training a year ago and at last our first guest was coming to us – in the middle of February. He would be using Son 2’s bedroom, Son 2 being away at University, and that meant he would be staying only a month, until the Uni holidays.

Our guest was a young man, like our own sons – except our sons live in a relatively secure world and are welcome wherever they go. We were excited to welcome him, and wondering what it would be like.

This is what has happened:

1. Our guest is very clean and does not smell (see also 2 below).
2. Our guest is very respectful of the house – I came home one day to find him mopping the bathroom. I praised him for doing the cleaning, but also gave him a patronising, mother-knows-best lecture about how really it’s best not to let the floor get quite that wet when cleaning it. The next day he admitted to me that he had begun to run a bath and forgotten about it. There appears to be no lasting damage but it was an exciting moment.
3. Our guest has been able to roam our local streets freely and neighbours barely seem to have noticed him.
4. Our guest is very tidy. He is also fairly nocturnal so it may be that when he is using the living room while we are asleep he makes an almighty mess – but it’s always tidy by morning!
5. Our guest has been polite and charming from the first. His English is also good. Misunderstandings have been only occasional.
6. He didn’t.
7. More of this below!
8. I have no idea whether he has or hasn’t, of course – thankfully it’s not my judgment to make.

Hard not to be nosy

There’s no doubt that having a guest, even a model guest like ours, has messed with my head. I am constantly aware of the horrible power dynamic between us. His presence makes me appreciate the freedom and comfort I live in, and question it.

It is a delight to be able to offer meals (he often eats with us), and other things like books to read and even English lessons. I’ve always been one of those do-goody types who likes to do things for people (I like to think it’s my ‘Friday’s child is loving and giving’ thing coming out) but it makes me uncomfortable too to be aware that I can only do those things because of my privilege.

I find it difficult not being able to ask the sort of questions you’d normally ask a guest staying at your house – like what’s their home life like? I want to ask these things partly because I’m nosy but also because this is how people get to know each other. We’ve had strangers as guests before – even a retired bishop – but no one that you had to think very carefully about every conversation starter!

We’ve found out a bit about him of course, and even taken part in a couple of face times with his parents, but it is sobering that we don’t have the right to pry. It’s one of the very few bits of the power dynamic where our guest has some power, and it must be protected; and it’s made me think differently about the difference between caring about someone and just being nosy.

I hate my own judginess too. I judge everything and everyone. I don’t like to think of myself as judgmental but I am. An example. The other day the subject came up of job ambitions. It’s a live topic in our house, where Son 1 is training to be a teacher and Son 2 hasn’t yet got a plan beyond his History degree.

‘I want to be a landlord,’ my guest said. Despite my love of Homes Under the Hammer this is not an aspiration that seems admirable to me, so I asked him why. ‘Because it’s easy money!’ he said. And behind my smile I judged him. Which isn’t fair. Especially given what I don’t know about him and can’t ask.

Actually I can’t help hoping this is going to do me good. The discipline of not being able to quiz him mercilessly about his past, his situation, his hopes and dreams, coupled with the aching curiosity of wanting to know all about him, is I hope helping me to judge people less: not before time!

So that was the first month of our first hosting – better and different, than expected, and challenging in unexpected ways. It was amazing how such an easy, charming guest could make me question my own value system in such a fundamental way. 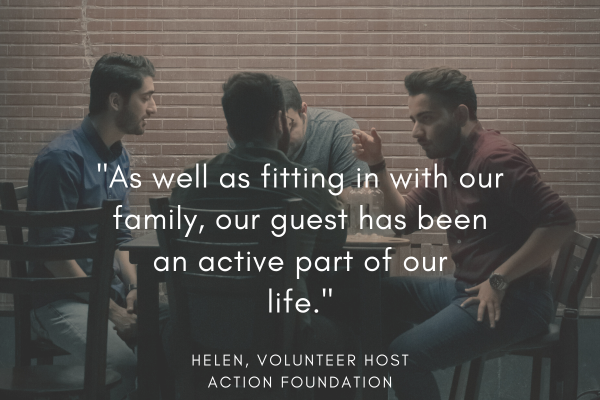 And then came another thing that we kind of expected but couldn’t be prepared for – lockdown.
Suddenly our guest’s freedoms were limited even further. Where we live there was no way he could get to his foodbank or other support services within the guidelines, and it would be difficult for him to move on to another host to make way for Son 2, as originally planned.

I was anxious about Son 2. He had had a fabulous term at University, and coming home to lockdown with next term cancelled would be tough for him, especially as the guest was in his bedroom (we are lucky to have a spare room for him, but still, not an ideal homecoming).

Here’s where we get more surprises – connected to item 7 on my list. A household of 5, three of whom are young men, one stranger and two who are so close that they have spent most of their lives arguing and fighting, seemed like a recipe for stress and tension. But it hasn’t been.

The family has been amazing in lockdown, finding new ways to help each other through – volleyball in the patch of garden, homemade games of Deal or No Deal, one son coping with the crisis of Greggs being shut by teaching himself to make sausage and bean pasties. It turns out that all the years of fighting was just practice for this time!

Our guest uses all this wisely, joining in when he needs to feel part of a family and bowing out when he needs his own time. The young men circle each other (and the fridge) circumspectly making sure their needs are met.

And then he produced a violin, which has been lent to him on a scheme and which he wants to learn to play. The serendipity of me being a viola player seems quite extraordinary. I’m not sure he’s thought too highly of my teaching, but we’ve had a few lessons and he is coming on a treat.

As well as fitting in with our family, our guest has been an active part of our life. He’s taught us words in his language and aspects of his culture, he’s begun discussions with us, often on unexpected topics – such as the truth about the biblical book of Esther – and he’s laughed with us, especially when we’ve been laughing at each other.

We have had to have conversations about what lockdown means. It’s difficult for us to understand fully the rules, and explaining them is even harder: ‘no, you shouldn’t be getting a bus to meet friends, even if it’s distanced in a park. It’s not exactly against the law and it might feel safe but how would you feel if you did that and brought virus into this house?’ It felt really harsh!

Understanding what’s necessary as opposed to just ‘what we really want’ has been hard for us, let alone our guest, whose limited life choices just became even more straitened.

This has been, for us as for everyone, a very strange time, and the fact that none of us has (yet) imploded is in itself cause for celebration. But we have managed to rub along better than OK.

On to the next surprise – just before total lockdown our guest managed to make his Section 4 application – and it has been approved. Everyone is shocked; it never happens this fast. More, he got the call today and is leaving us tomorrow.

We will remain in touch – if nothing else we have to keep hold of the violin for the time being! – and hope that perhaps we can become ordinary friends once the host/guest power dynamic has faded. This isn’t over, and we are all wondering now how life will change the day after tomorrow.

If you’re based in the Newcastle region and are interested in finding out more about becoming a host with Action Foundation, please get in touch with their hosting scheme coordinator. If you’re based anywhere else in the UK and would like further information, please enquire using our online form and we can put you in touch with an appropriate hosting scheme in your area.